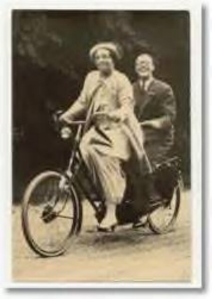 What is eight feet long, has two wheels, four arms, four legs, and two heads that scream at each other “Stop leaning! I’m NOT! WHOA! I feel like I’m going to DIE! AAAHHHH!”?

Hubster and I on our new tandem bicycle.

You wouldn’t think it would be that hard, would you?  I mean, it’s a bike, for Pete’s sake, not a jumbo jet.  (Although it’s nearly as long as one.)

The tandem bicycle laughs at your ignorance, just as it laughed at ours.

“Ha!” says the malicious deathcycle, “You think you can ride me?  Bring it on, amateurs.  I ain’t your mama’s Schwinn, with the cute little basket and the bell on the handle bars. I am the modern tandem—sleek, and beautiful, and ready to throw you to the pavement at the slightest mistake.  What?  You didn’t bring your helmet to test drive me?  Aw, that’s too bad.  I wonder what you’ll carry your head home in.”

We did manage to successfully complete the near death experience test drive without any carnage.  Afterwards, Hubster asked me, “Well, what do you think?”  I said, “I think it’ll be a lot of fun if it doesn’t kill us.”  And so we brought it home.  No hateful bicycle’s gonna be the boss of me, doggone it.  Besides, this is the only way I have of ever keeping up with Hubster, who rides way faster than me.

But from now on, I’ll be wearing my helmet and some Depends.