Looking at this picture, you might think that I would write a post about Dad, my Hee Haw bib overalls, or the family garden.  (After all, we were on a vegetable theme on Thursday)  However, that’s just not the way my mind works.  When I looked at this picture, one of the things I noticed is that we’re sitting on the hood of my dad’s Ford Courier.

Those of us who lived through the 70’s no doubt remember the movies Smoky and the Bandit, Convoy, and the whole trucker craze.  It cracks me up to even type that, because only in the 70’s could truckin’ have been glamorous.  I’m pretty sure that unlike other things that eventually come back into the realm of cool, truckin’ won’t.  Now, I’m not hatin’ on truck drivers.  However, the one thing that really made this whole thing a big deal back then was the CB radio.  Everybody and their mama had a CB, including my dad and his Ford Courier.  Why?  Well, because it was cool, that’s why.  I mean, we probably weren’t going to need to find out where the smokies were on our way to the dump.  But, doggone it, we had our CB just in case.

But CB’s were cool, and truckers had cool handles like Rubber Duck and Spider Mike, and they said stuff like, “Breaker 1-9, Pig Pen, got yer ears on?”  Plus, having a CB meant that you could (*gasp*) actually talk to people in other vehicles!  Within a certain distance, of course.  These days, that’s no big deal at all.  Shoot, you can talk to people in other vehicles on other continents if you want to—courtesy of the cell phone.

So, I’m afraid that trucker culture probably won’t be coming back in vogue.  But the CB radio, like Hee Haw and my dad’s Ford Courier, will always be loved here at the flashback.  So the next time you call me, feel free to use a trucker handle, like Big Nasty or Widow Woman, and I’ll say, “What’s yer twenty?”

When I was a kid, the Easter Bunny would always leave a basket of sugary goodness for me on Easter morning. He’d also hide eggs around the yard for me to find. Well, almost always. One year, I awoke only to find that there was no basket. Heartbroken, I went to my mom, who was still in bed and lamented that the Easter Bunny had forgotten me. Mom, who was clearly as shocked as I was about the situation, instructed me to go back to my room and shut the door. She was going to call the Easter Bunny, and make him come back to our neighborhood.

Yeah! You go Mom! You tell that Easter Bunny he’d better get his cotton tail back over here and bring me some chocolate!

I wasn’t sure why I had to go back to my room. Maybe so I could get dressed in my best double plaid Easter egg hunting suit. Or maybe because my Mom was going to tell ol’ E.B. about himself in language not fit for my tender ears. But sure enough, in about 15 minutes Mom came and got me and said that the Easter Bunny had brought my basket. 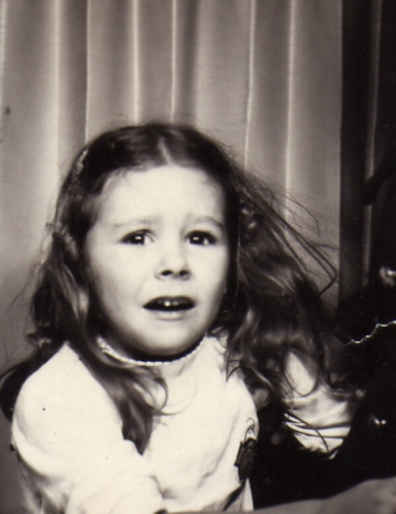 Am I the only person who has emotional scars from being put in a photo booth as a young child?  Alone.  ALONE.  In a big scary box.  Blinded by a flashing light.  No amount of reassurance from my mother would convince me that it was only going to take my picture.  That it wouldn’t suck the life right out of me as I sat there.  Steal my soul.  No amount of my mother’s coaxing, or shoving me back behind the curtain, or blocking the exit with her body could subdue my flailing, wailing, escape attempts.  Nor could the pleas of my mother, who had dumped a bunch of money into the evil box, convince me to sit still and wipe that look of sheer terror off my young face.  Nope.  Maybe that’s why there’s only one photo from this episode, stuffed into an album for posterity’s sake.   The rest were of an empty booth.